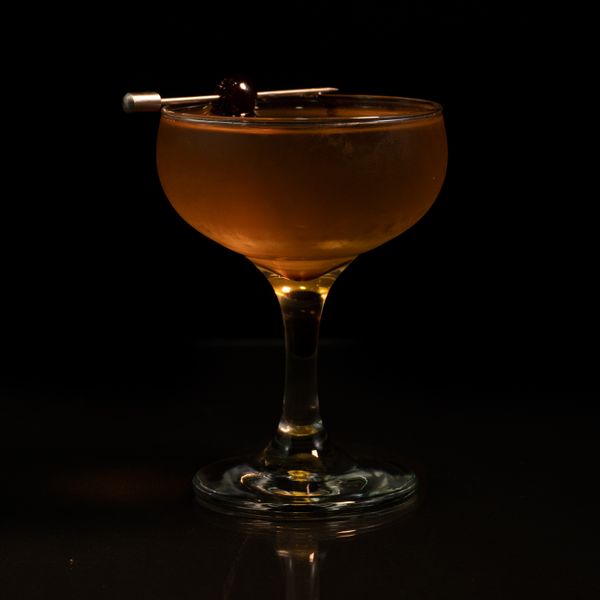 The Metropole is another artifact we pulled from the venerable pages of the Old Waldorf Astoria Barbook. Like its neighbor the poet's dream, the Metropole appeared in the first edition of Ol’ Waldorf Astoria Bar Days, a book that was later published under the more famous epithet still in print today. Unlike the poet’s dream, the Metropole was gifted with a special luxury: a little snippet of context that authors of the era would slip under—at best—one recipe per couple pages (These meager times stand in stark contrast to today, dear reader, where you may enjoy multiple whole paragraphs per recipe on this humble site). In the case of the Metropole, the blurb attributes the cocktail to the “once well-known and somewhat lively hotel, whose bar was the center of life after dark in the Times Square district.” The hotel of reference is Hotel Metropole, whose busy bar was popular with writers and newspaper publishers, but even moreso with gamblers, gangsters, and con-men. Eventually, it would become infamous as the murder location of Herman Rosenthal, who owned several gambling dens in the city and had been evading the police.

The Metropole cocktail is built on the classic Manhattan structure, but to call it a riff would be generous: the vermouth is different, the base is different, and the bitters are different. Some contemporary writers opted to adjust the proportions to the standard 2:1 ratio of a Manhattan. We tried both and liked both, but slightly prefer the original formula, whose old school proportions make for a memorable and historic sip. The results feel fresh yet comfortingly familiar; the fruitiness of the brandy helps compensate for the sweetness lost when switching from sweet to dry vermouth, and the Peychaud’s adds a nice touch of squeaky-clean brightness that—along with the brandy—reminds us a bit of a historical Sazerac. It’s an excellent selection when you want to try out a new bottle of cognac, and a beautiful low-fuss after work drink. It won’t womp you over the head, but that’s OK; it’s simple, clean, and balanced. If you are looking for brandy recommendations, any of the bottles on our ingredient page will fit the bill. We used a more complex, aromatic dry vermouth and it was just a bit much for this drink. We recommend something more straightforward like Dolin dry or La Quintine Vermouth Royal Extra Dry.